In India, sanitation workers provide an invaluable public service by risking their lives everyday to ensure that our cities stay clean. However, their occupation is highly unsafe and unsanitary. In many cases, their right to safe work is unmet. Their position has been further jeopardised with the outbreak of COVID-19 across the country.

Multiple independent studies have estimated that over 50 lakh sanitation workers across the country engage in sanitation work daily, out of which almost 20 lakh workers engage in the high-risk work of cleaning sewers and septic tanks.

Mahendra, 30, is a contractual municipal sanitation worker. In his 7 years of working as a sanitation worker, he has never thought about welfare schemes or their application processes. Mahendra says, “We are just Safai Karamcharis. We had no idea that there were special government schemes for us. Besides, we can’t just leave our work and go to government offices to get information about these schemes since that would have consequences on our wages.”

Munna, who has been a permanent employee for over 12 years now, struggles to manage his household of 5 with the little that he gets after ESI deduction. He says, “The contractor cuts a portion of our wages in the name of ESI contribution. However, my sathis and I don’t know what ESI is, and nobody tells us how we can avail benefits under ESI. We have accepted that we will have to pay this unnecessary contribution till the time we retire from this job.”

“Our jobs are dangerous and we are prone to numerous diseases. During Covid, we were very scared to go back to our families. During a recent camp organised for us by Haqdarshak, I enrolled myself for a life insurance scheme. So, even if something happens to me, at least my family will get some money for sustenance.” Sushma is a daily wager and cleans toilets on demand in an upmarket housing society in Pune.

There are countless such stories. At Haqdarshak, we have worked with more than 7000 sanitation workers across the country. In the process, we discovered the challenges they have faced in accessing social welfare and by extension, their right to better working conditions.

Sanitation and allied work in India has always been associated with caste-based oppression. Most of these workers, especially the manual scavengers, are Dalits. Even among different Dalit castes, these workers tend to be further lower in the rank, coming from some of the most marginalised and oppressed sub-castes. These workers are notably from the caste groups which sit at the bottom of the pyramid are culturally ‘bound’ to their occupation which is widely seen as disgraceful and ‘unclean’. As a result, these workers often experience untouchability and discrimination. A wider gap of injustice exists if we split the entire workforce by gender. Women sanitation workers (especially women from lower castes), in a country where patriarchy is thriving, are even further down in the social hierarchy.

These workers tend to lack social protection and endure poor working conditions while staying invisible, stigmatised and harassed. Even during the pandemic, their access to protective equipment mandated by the Supreme Court was very limited. The average life expectancy of a sanitation worker is less than 50 years. People engaged in the cleaning of sewage drains and septic tanks die before they reach 40. An analysis of such deaths done by Safai Karamchari Andolan (SKA) in 2017-2018 showed that on an average, sanitation workers die at 32. The cause of death is predominantly occupational ― asphyxiation in a septic tank, drowning in sewage, TB, cholera, meningitis, and various kinds of cancers.

In a nutshell, these frontline workers are battling a wide range of social and occupational vulnerabilities on a daily basis.

2. Lack of Identity Proof and Documentation

Sanitation workers often function without any formal identification and, therefore, are employed ‘below-the-radar’ with low trackability, effectively shielding employers from any sort of legal liabilities arising out of safety violations. Many workers also experience wage theft, and because they don’t have formal IDs, they are unable to file grievances. Also, no documentation means no scheme benefits.

Interestingly, there is a lack of reliable information on the actual number of permanent and contractual workers engaged in sanitation work. The government, majorly due to definitional reasons, does not completely track the number of sanitation workers in the country.

In order to extend a social security net and an upward occupational mobility to these workers, the government’s policies are heavily oriented towards the rehabilitation of these workers by training them for alternative livelihoods, (limited forms of) indemnity and welfare support as mandated by the Supreme Court.

These policies are implemented in the form of schemes that provide loans for rehabilitation, and those promising indemnity, compensation and welfare. At Haqdarshak, we have observed that the uptake of these schemes is really low. The major reasons behind this are the lack of awareness about the schemes, eligibility criteria and cumbersome documentation processes. There is also mistrust and weariness since many workers have tried numerous times to apply for these schemes, but their applications have been rejected due to errors in forms, incorrect or incomplete documentation and most importantly, due to low or no disbursement of funds.

It is important to note that finance as rehabilitation is not enough ― upskilling is just as important. For more, read this article.

We have observed that workers have a negative mindset about the schemes implemented by the National Safai Karamcharis Finance and Development Corporation (NSKFDC). This mistrust can be attributed to the Act’s definition of ‘manual scavenger’ which excludes mechanised operators, and sanitation workers and their dependents, even though they use protective gear as defined in the Act. On the other hand, it also paralyzes the State Channelising Agencies (SCAs) identified at the state level to implement the schemes since it excludes these distressed workers by design.

The caste system and societal hierarchies have played a major role in the socio-economic marginalisation and deprivation of sanitation workers. Unfortunately, they have remained invisible to the public, the state and even the social impact ecosystem. They are in immediate need of social security.

As stated earlier, finance as a rehabilitation measure is not enough, there is a greater need for the upskilling or training of these workers for switching to alternate livelihoods, along with sensitising society towards ‘safai karamcharis’. In most of the cases, sanitation workers are unaware of their rights under these programmes and schemes. Even if they are aware, they seldom know the processes to avail benefits. Furthermore, because most of the sanitation workers are urban poor and reside in informal settlements, they do not have adequate documents such as caste certificates, proof of residence, birth certificate and formal identity proof which makes it impossible for them and their dependents to apply for welfare schemes.

Haqdarshak has supported sanitation workers in accessing benefits of multiple financial inclusion schemes such as PM Jeevan Jyoti Bima Yojna, PM Suraksha Bima Yojna, Atal Pension Yojna, and even ESI. If you wish to help, please reach out to us. 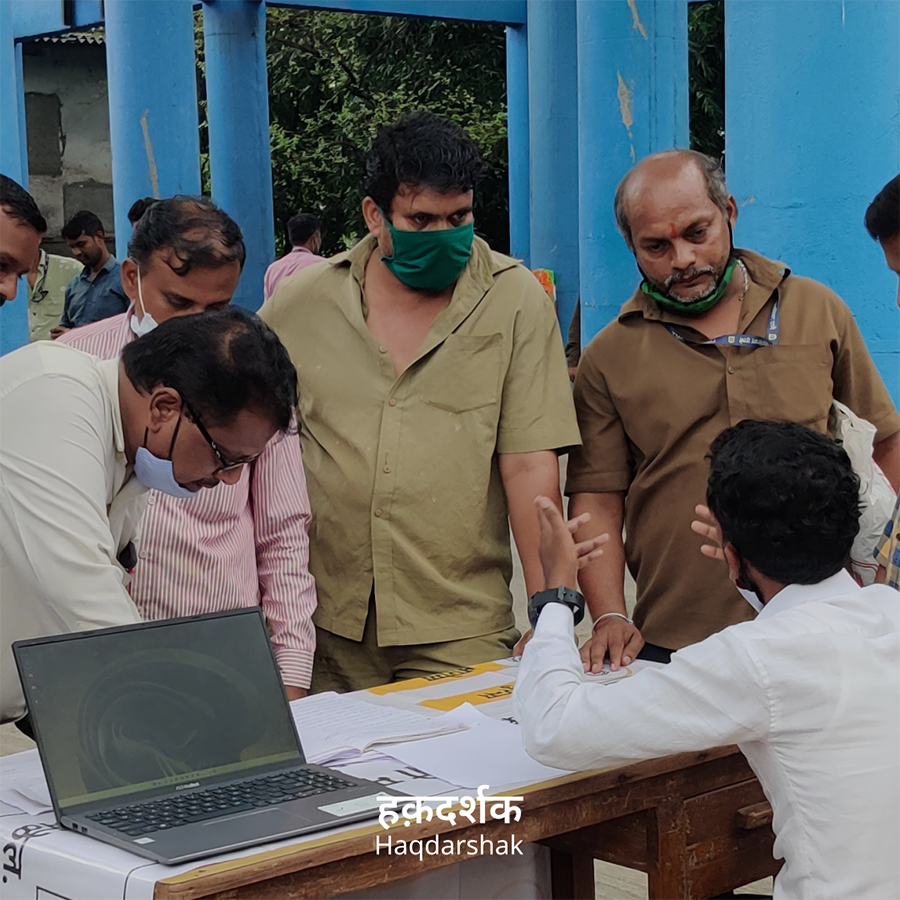